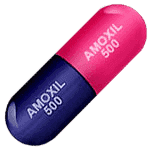 Amoksicilin is a widely-used antibiotic drug. It belongs to the penicillin group of drugs and is prescribed to treat certain infections that are caused by bacteria. It can also be used alongside other medications to treat stomach ulcers caused by H. pylori infection.

Amoksicilin is also used before some surgery or dental work to prevent infection. It is also used in combination with other medications to eliminate H. pylori, a bacteria that causes ulcers. Amoksicilin may also be used for other purposes not listed here.

Amoksicilin acts by inhibiting the synthesis of bacterial cell wall and stopping the growth of bacteria.

Amoksicilin is available in capsules.

Amoksicilin is usually taken every 8 hours (three times a day). It can be taken with or without food.

Children younger than 2 years should be treated with Amoksicilin; clavulanic acid, not Amoksicilin alone.

In case of overdosage, discontinue medication, treat symptomatically, and institute supportive measures as required. If the overdosage is very recent and there is no contraindication, an attempt at emesis or other means of removal of drug from the stomach may be performed. A prospective study of 51 pediatric patients at a poison-control center suggested that overdosages of less than 250 mg/kg of Amoksicilin are not associated with significant clinical symptoms and do not require gastric emptying.

Interstitial nephritis resulting in oliguric renal failure has been reported in a small number of patients after overdosage with Amoksicilin.

Crystalluria, in some cases leading to renal failure, has also been reported after Amoksicilin overdosage in adult and pediatric patients. In case of overdosage, adequate fluid intake and diuresis should be maintained to reduce the risk of Amoksicilin crystalluria.

Renal impairment appears to be reversible with cessation of drug administration. High blood levels may occur more readily in patients with impaired renal function because of decreased renal clearance of Amoksicilin. Amoksicilin may be removed from circulation by hemodialysis.

The most common side effects associated with Amoksicilin are:

Dogs with superficial or deep pyoderma or wounds/abscesses were enrolled in three separate studies. Dogs (354) were randomised to treatment and received either cefovecin administered by subcutaneous injection at 14 day intervals, as clinically necessary, or amoxicillin/clavulanic acid as oral tablets twice daily for 14 days. Courses of treatment were repeated at 14 day intervals up to a total of four courses. Clinicians responsible for assessing lesions were masked to treatment allocation. Only animals where the presence of a pretreatment bacterial pathogen was confirmed were included in the analysis of efficacy. Cases were evaluated for clinical efficacy at 28 days after initiation of the final course of treatment. Clinical efficacy was assessed by scoring the clinical signs typical of skin infections.

To examine the pattern of antibiotic and painkiller prescriptions per diagnosis by dentists.

Retrospective study of serotypes, phage types and antibiotic resistance of Salmonella spp isolates in the 02 Health District of Castellón, Spain (2000-2006). Strains were serotyped using commercial sera, and they were tested for antimicrobial susceptibility with automated systems. Serotyping confirmation and phage typing were performed by the National Reference Laboratory. A total of 1505 strains were isolated, with 49 different serotypes, being the most frequent Enteritidis. The most common serotype/phage type combination was S. Enteritidis phagetype 1. Of the isolates 81.6% were susceptible to amoxicillin/clavulanic acid; 65.2% to ampicillin; 99.9% to ciprofloxacin; 93.4% to trimethoprim-sulphametoxazole; and 99.8% to cefotaxime. Molecular methods could be useful to complete epidemiologic studies since 25% of our isolates showed the same serotype/phage type combination. In our health district antimicrobial resistance in Salmonella is not an important problem.

Non-prescription sale and dispensing of antibiotics is widespread in Zambia. Concerted public and professional interventions are needed coupled with stronger regulatory enforcement to reduce this.

The treatment groups did not differ significantly in terms of demographics, clinical success rate, microbiological cure rate, or adverse effects. Significantly higher drug compliance was observed in the fosfomycin trometamol group than in the other 2 groups (P<0.05).

The study population included 151 children younger than 14 years admitted with first UTI. Renal ultrasound was performed in all the patients and voiding cystourethrography (VCUG) in children younger than 5 years. Dimercaptosuccinic acid (DMSA) scan was performed in children with vesicoureteral reflux. The data included age, sex, symptoms and signs, urinalysis, the pathogen and its sensitivity and the results of the imaging studies.

Overall, in terms of clinical and bacteriological response, moxifloxacin was equivalent to amoxicillin/clavulanate for the treatment Azitromicina Zentiva 500 Mg of acute bacterial sinusitis in adults.

Analysis of the 5 year data set showed that temporal variations in MRSA incidence followed temporal variations in the use of fluoroquinolones, third-generation cephalosporins, macrolides and amoxicillin Ofloxacin Renal Dose /clavulanic acid (coefficients = 0.005, 0.03, 0.002 and 0.003, respectively, with various time lags). Temporal relationships were also observed between MRSA incidence and infection control practices, i.e. the number of patients actively screened for MRSA (coefficient = -0.007), the use of alcohol-impregnated wipes (coefficient = -0.0003) and the bulk orders of alcohol-based handrub (coefficients = -0.04 and -0.08), with increased infection control activity being associated with decreased MRSA incidence, and between MRSA incidence and the number of new patients admitted with MRSA (coefficient = 0.22). The model explained 78.4% of the variance in the monthly incidence of MRSA.

Two Leflox Tablet 500mg thousand and sixty-one adults with acute LRTI, where pneumonia was not suspected clinically, were given amoxicillin or matching placebo. The duration of symptoms, rated moderately bad or worse (primary outcome), symptom severity on days 2-4 (0-6 scale), and the development of new or worsening symptoms were analysed in pre-specified subgroups of interest. Evidence of differential treatment effectiveness was assessed in prespecified subgroups by interaction terms.

The systematic review focused on key questions prioritised through a Amoxi Dose Delphi study and, as a consequence, did not encompass all elements in the management of SAM. In focusing on evidence from controlled studies with the most rigorous designs that were published in the English language, the systematic review may have excluded other forms of evidence. The systematic review identified several limitations in the evidence base for assessing the effectiveness of interventions for treating young children with severe acute malnutrition, including a lack of studies assessing the different interventions; limited details of study methods used; short follow-up post intervention or discharge; and heterogeneity in participants, interventions, settings, and outcome measures affecting generalisability.

Combined effect of ciprofloxacin (Ci) and amoxycillin (Ax) has been studied in vitro against 12 clinical isolates of S. typhi that showed Ci Clindamicina 800 Mg minimum inhibitory concentration (MIC) of > or =1 microg/ml. By agar dilution method, MIC values of Ax were 10-16 microg/ml for 11 isolates and 0.5 microg/ml for the remaining one isolate. The isolates, when treated with Ci and Ax in combination, showed fractional inhibitory concentration (FIC) of 0.004-0.256 microg/ml for Ci. FIC of Ax ranged from 6-10 microg/ml, except for a single isolate that showed Ax FIC of 0.25 microg/ml. Thus Ci was more efficacious in combination with Ax against S. typhi than Ci alone. The antibiotic combination exhibited an additive effect for all the isolates showing FIC index 0.504-0.832.

The eradication rates were 78.7% in the intention-to-treat analysis and 81% in the per-protocol analysis. The incidence of adverse events was 6.6%. Drug compliance was 95.1%. Antibiotic resistance showed the following results: Amoxicillin (0%), Pediazole Dose levofloxacin (23.5%), clarythromycin (35.3%), metronidazole (17.6%), and tetracycline (0%).

The incidence of sexually transmitted diseases recently increased in the United States and Europe due to migration, increase in high-risk behavior, and abandonment of safer sex practices at the advent of anti-retroviral combination therapy for human immunodeficiency virus infection. This article presents four cases of primary oral anti perioral syphilis with differential diagnoses. It is important to bear this reappearing infection in mind to avoid latent infection. Resembling common oral infections, the primary affect disappears spontaneously, and the infection enters the second stage. The patient remains infected, may further spread the disease, and risks severe organ damage from long-standing infection. The antibiotic cure is inexpensive and safe and spares the patient mucous patches and gumma residuals, apart from severe general sequelae such as thoracic aorta aneurysm and neurosyphilis. However, compliance problems jeopardize clinical and serologic follow-up. The growing syphilis incidence prompts the commemoration of Dr Moriz Kaposi and his dispositive 1891 book Pathology and Therapy of the Syphilis. Moriz Kaposi is acknowledged as one of the heads of the Vienna School of Dermatology, a superb clinician, and renowned teacher.

The Drug-Resistant Pathogen Surveillance Group in Pediatric Infectious Disease has conducted surveillance of pediatric patients with respiratory tract infections, meningitis, and sepsis five times (in 2000-2001 [period 1], 2004 [period 2], 2007 [period 3], 2010 [period 4], and 2012 [period 5]). With respect to the clinically isolated Haemophilus influenzae, the drug susceptibility, the frequency of drug-resistant strains, and patients' background factors in each period have already been reported. Here we evaluate trends in the development of drug resistance in H. influenzae, and the relationship between the development of drug resistance and patients' background factors in the aforementioned five periods. H. influenzae derived from pediatric patients with respiratory tract infections that had been previously collected (period 1, 448 isolates; period 2, 376 isolates; period 3, 386 isolates; period 4, 484 isolates; and period 5, 411 isolates) were analyzed. The proportions of ß-lactamase-nonproducing ampicillin (ABPC)-intermediate resistant (BLNAI) strains + β-lactamase-nonproducing ABPC-resistant (BLNAR) strains were 28.8% in period 1, 59.3% in period 2, 61.1% in period 3, 58.1% in period 4, and 63.5% in period 5, showing a rapid increase from period 1 to period 2 followed by an almost constant rate of approximately 60%. The proportion of ß-lactamase-producing ABPC-resistant (BLPAR) strains + ß-lactamase-producing clavulanic acid/amoxicillin-resistant (BLPACR) strains was 4.4% in period 3, which was somewhat low; however, there were no significant changes in the proportions of these strains, which ranged between 6.4% and 8.7% throughout the surveillance period except for period 3. The drugs whose MIC90 values against BLNAR strains were low throughout the surveillance included piperacillin (0.25 μg/mL) and tazobactam/piperacillin (0.125-0.25 μg/mL) in the penicillins; cefditoren and ceftriaxone (0.25-0.5 μg/mL for both) in the cephems; meropenem (0.5-1 μg/mL) and tebipenem (1 μg/mL) in the carbapenems; and levofloxacin, tosufloxacin, and garenoxacin (≤ 0.06 μg/mL for all) and norfloxacin (0.06-0.125 μg/mL) in the quinolones. We investigated the relationship between the frequency of BLNAS strains/BLNAI + BLNAR strains and patients' background factors in each surveillance period. Significant differences were shown on age category (< 3 years or ≥ 3 years) in all periods except period 4, and the presence/absence of prior administration of antimicrobial agents within one month in period 2 and period 3. In all periods, the frequency of BLNAI + BLNAR strains were higher in patients aged < 3 years than in patients aged ≥ 3 years, and were also higher in patients with presence of prior treatment than in patients without prior treatment. We consider that it is important to promote the proper use of antimicrobial agents by conducting surveillance continuously in the future to clarify the relationship between the development of drug resistance in H. influenzae and patients' background factors and provide those information to clinical setting.