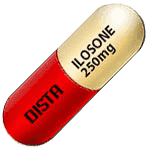 Other names for this medication:
Erythromycin, Ilosone, Pediazole

Generic Eltocin is created by pharmacy specialists to struggle against infections (pneumonia, Legionnaire's disease, sexually transmitted diseases, skin infections). It is also helpful in treatment of severe acne and prevention of heart diseases in people who suffer from rheumatic fever. Target of Generic Eltocin is to control, ward off and terminate bacteria.

Patients should be counseled that antibacterial drugs including Eltocin Tablets should only be used to treat bacterial infections. They do not treat viral infections (e.g., the common cold). When Eltocin Tablets are prescribed to treat a bacterial infection, patients should be told that although it is common to feel better early in the course of therapy, the medication should be taken exactly as directed. Skipping doses or not completing the full course of therapy may (1) decrease the effectiveness of the immediate treatment and (2) increase the likelihood that bacteria will develop resistance and will not be treatable by Eltocin Tablets or other antibacterial drugs in the future.

Diarrhea is a common problem caused by antibiotics which usually ends when the antibiotic is discontinued. Sometimes after starting treatment with antibiotics, patients can develop watery and bloody stools (with or without stomach cramps and fever) even as late as two or more months after having taken the last dose of the antibiotic. If this occurs, patients should contact their physician as soon as possible.

You overdose Generic Eltocin and you don't feel good you should visit your doctor or health care provider immediately. Symptoms of Generic Eltocin overdosage: retching, diarrhea, pain of stomach, loss of hear, nausea.

Store at room temperature between 15 and 30 degrees C (59 and 86 degrees F) away from heat, moisture, and direct light. Keep from freezing. Keep container tightly closed. Throw away any unused medicine after the expiration date. Keep out of the reach of children.

The most common side effects associated with Eltocin are:

Prescribing Eltocin Tablets in the absence of a proven or strongly suspected bacterial infection or a prophylactic indication is unlikely to provide benefit to the patient and increases the risk of the development of drug-resistant bacteria.

Since Eltocin is principally excreted by the liver, caution should be exercised when Eltocin is administered to patients with impaired hepatic function.

There have been reports of infantile hypertrophic pyloric stenosis (IHPS) occurring in infants following Eltocin therapy. In one cohort of 157 newborns who were given Eltocin for pertussis prophylaxis, seven neonates (5%) developed symptoms of non-bilious vomiting or irritability with feeding and were subsequently diagnosed as having IHPS requiring surgical pyloromyotomy. A possible dose-response effect was described with an absolute risk of IHPS of 5.1% for infants who took Eltocin for 8 to 14 days and 10% for infants who took Eltocin for 15 to 21 days.5 Since Eltocin may be used in the treatment of conditions in infants which are associated with significant mortality or morbidity (such as pertussis or neonatal Chlamydia trachomatis infections), the benefit of Eltocin therapy needs to be weighed against the potential risk of developing IHPS. Parents should be informed to contact their physician if vomiting or irritability with feeding occurs.

Prolonged or repeated use of Eltocin may result in an overgrowth of nonsusceptible bacteria or fungi. If superinfection occurs, Eltocin should be discontinued and appropriate therapy instituted.

When indicated, incision and drainage or other surgical procedures should be performed in conjunction with antibiotic therapy.

A noncompliance rate of >30% is unsatisfactory. Whereas some variables significantly associated with compliance cannot be influenced (patient age; place of residence in town or city), others are amenable to modifications. These include the physician-patient interaction and the choice of antibiotic. Agents should be preferred that are well-accepted by patients, that enable short-term therapy with few daily doses and with a package that contains a dose-taking reminder.

Using prescription-event monitoring to determine whether erythromycin estolate was a more frequent cause of jaundice than erythromycin stearate or tetracycline 12 208 patients, for whom 5343 doctors had prescribed one of the three drugs, were identified by the Prescription Pricing Authority. Of the questionnaires sent to general practitioners about the possible occurrence of jaundice, 76% were returned. There were 16 reports of jaundice, of which four were attributable to gall stones, three to cancer, six to viral hepatitis, and only three were possibly related to an antibiotic. All three patients, in whom the antibiotic was a possible cause, had been treated with erythromycin stearate. No case was attributable to the estolate which had previously been suspected of being a more frequent cause of jaundice. Although the incidence is unknown, it is very unlikely to be more than one in 100.

We searched the Cochrane Pregnancy and Childbirth Group's Trials Register (31 May 2011).

The MIC and MPC were determined for 191 penicillin/macrolide-susceptible clinical isolates of S. pneumoniae with azithromycin, clarithromycin and erythromycin using agar plate assays.

Three to four review authors independently extracted data and assessed the quality of each trial.

The tetracyclines are active in vitro against many urinary tract pathogens such as Chlamydia, Mycoplasma pneumoniae, Brucella, rickettsiae, and Nocardia. Chloramphenicol is used primarily for anaerobic infections, Haemophilus influenzae meningitis, and infections due to Salmonella typhi. Erythromycin is active in vitro against M. pneumoniae, Legionella spp., Streptococcus pneumoniae, and group A beta-hemolytic streptococci; it may also be used as prophylactic therapy for subacute bacterial endocarditis and for recurrence of acute rheumatic fever in patients who are allergic to penicillin. Clindamycin should be used primarily for the treatment of anaerobic infections. The tetracyclines may cause gastrointestinal upset; phototoxic dermatitis; hepatitis, especially in pregnant women; discoloration of the teeth and bone dysplasia in the human fetus and in children; and superinfections, especially oral and anogenital candidiasis. The tetracyclines should be used with caution Ciproxin Antibiotic in patients with renal insufficiency. The most important toxic effect of chloramphenicol is bone marrow suppression, which is dose related or idiosyncratic. The incidence of undesirable side effects associated with the use of erythromycin is low; gastrointestinal irritation is the most common, and cholestatic hepatitis may occur with the use of erythromycin estolate. Pseudomembranous colitis is the most important toxic effect associated with the use of clindamycin.

Erythromycin acistrate is a new 2'-acetyl esther prodrug of erythromycin, whose structure resembles that of erythromycin estolate. However, in toxicological studies, it does not have the problems of hepatotoxicity. To assess its effects on hepatic functions in clinical practice, the liver parameters of patients with respiratory tract or skin infections were monitored during therapy. In total 1549 patients were treated for 7-14 days. In addition, 127 patients with suspected viral infections served as controls. There were no significant differences in serum aspartate aminotransferase (ASAT), alanine aminotransferase (ALAT), gamma-glutamyltransferase (gamma-GT) or alkaline phosphatase (APHOS) values between the erythromycin acistrate or control groups at the beginning or end of therapy. ASAT values increased moderately in 2.4% and clearly in 0.3% of patients treated, but also decreased in 2.0%. ALAT values were moderately increased in 9.9%, clearly increased in 0.6% and normalized in 3.5% of the patients. gamma-GT values increased moderately in 3.5% and and clearly in 0.3%, but decreased to normal in 3.3% of the patients. APHOS was moderately elevated in 1.0% of the patients and normalized in 1.3%. The correlation of changes between the different liver enzymes was poor. Only ten patients (0.6%) had two or more clearly elevated liver enzyme values by the end of the therapy, of whom five had increased liver enzyme Natravox 650 Mg activities before the treatment, two had underlying disease explaining the changes and in only three patients out of 1549 (0.2%) could hepatic changes be attributed to erythromycin acistrate therapy. These changes were reversible. The results demonstrate the hepatic safety of erythromycin acistrate in clinical practice. Concomitant food intake did not affect the safety profile.

The clinical pharmacology of orally administered antibiotics was investigated in 106 infants and children. The antibiotic suspensions studied Sumamed 125 Mg Cena were ampicillin, cephalexin, erythromycin estolate, erythromycin ethylsuccinate, penicillin G, and penicillin V. The feeding status of the patients was evaluated in relation to the concentrations of drugs in serum, saliva, and tears. Peak concentrations and area-under-the-curve values of cephalexin, penicillin V, and penicillin G were reduced 40% to 60% in patients given milk and drug concurrently. Absorption was enhanced when erythromycin ethylsuccinate was given milk. After administration of both erythromycin formulations, penicillin V and ampicillin, salivary concentrations exceeded the minimal inhibitory concentrations for most pneumococci and group A streptococci and for many meningococci. The clinical implications of these pharmacokinetic data are discussed.

Reaction mechanism of macrolide 2'-phosphotransferase [MPH(2')] from Escherichia coli to the 2'-modified macrolide antibiotics was analyzed by using microbioassay, nuclear magnetic resonance (NMR) spectrometric assay and mass spectrometry. It was found by microbioassay that the 2'-modified macrolide antibiotics as triacetyloleandomycin (TAO), erythromycin ethyl succinate (EME) and Cefixime Cost erythromycin estolate were inactivated with adenosine triphosphate (ATP) by MPH(2'). The NMR spectrometric assay for the analysis of the reaction with the 2'-modified macrolide antibiotics and MPH(2') was established using guanosine triphosphate, which was higher reaction rate than ATP, as a cofactor. It was clearly shown by NMR spectrometric assay and mass spectrometry that the C2'-side chain of TAO and EME was naturally released in phosphate buffer solution, and then, the C2' position was phosphorylated with GTP by MPH(2').

The microbiologic and clinical responses of acute Group A beta-hemolytic streptococcal infections of the upper respiratory tract Amylin Syrup to oral treatment with erythromycin ethyl succinate, stearate, and estolate were studied in 303 patients. Streptococcal M and T typing was done on all positive cultures. The overall cure rate was 95.4 per cent, with no statistically significant differences in clearing organisms from the pharynx. Of the 285 cured patients who completed the prescribed follow-up period, 11 had recurrences between the 12th and 31st day after initiation of therapy, and five developed new infections. No cases of rheumatic fever or glomerulonephritis were encountered during a follow-up study. Eight gastrointestinal reactions and one transient rash occurred. Results with these forms of erythromycin compare favorably with published results for similar infections treated with oral penicillins.

Primary cultures of rat hepatocytes were used to study the effects of the flavonoids diosmin and its main metabolite diosmetin on the cell membrane damage caused by erythromycin estolate (EE) and oxidative stress caused by tert-butylhydroperoxide (TBHP). The damage was evaluated by the leakage of intracellular enzymes lactate dehydrogenase, aspartate-aminotransferase and the residual cell content of a lysosomal marker acid phosphatase (AP). After treating the cells for 40 h with diosmetin EE induced less enzyme leakage. The content of AP was kept higher by diosmetin pretreatment after 6 h exposure to EE. Diosmin at the same concentrations had barely any effect. Diosmetin, but not diosmin, also protected against TBHP toxicity and this was related to lower lipid peroxidation and higher glutathione content caused by pretreatment with the flavonoid. When the cells were treated simultaneously with TBHP and diosmetin after 21 h of culture, the protection by the flavonoid was even higher. In fact the antioxidant activity of diosmetin was considerably greater than that of diosmin. After 40 h exposure to both flavonoids diosmin but not diosmetin was detectable in the cell membrane fraction, suggesting that the Cefix Tablet latter's protective effect is associated with its metabolites.

The activities of 11 5-nitroimidazole compounds have been compared against Giardia intestinalis in vitro using a 3H-thymidine incorporation assay. All the compounds were at least equipotent to, or more active than metronidazole with the exception of panidazole. Satranidazole, ronidazole and S75 0400 A were all about five times more active than metronidazole and warrant further study as potential chemotherapeutic agents for man. No major differences in the response to these compounds was found between two stocks of Giard. intestinalis with the exception of flunidazole. Several other antiprotozoal drugs showed activity against Giard. intestinalis. Berberine Metrosa 75 Gel sulphate, paromomycin sulphate, erythromycin estolate and sulphasalazine, all of which have been used to treat human patients, showed no activity in vitro.